Whilst assessing the state of protected areas in Ethiopia I became concerned at the number of parks occupied by cattle for large parts of the year, or all year round in some cases. Farming had encroached into several parks, covering up to 80% of the territory, large mammal populations were severely depressed and many species had disappeared entirely.

The same desperate state is found elsewhere. The Angolan National Biodiversity Strategy and Action Plan (2007-2012) states: “the situation of the Kissama, Cangandala, Iona, Bikuar and Cameia National Parks is one of almost total abandon, without equipment or staff. Part of these areas are today occupied in a disorganised manner by people that practice hunting and bush-burning at levels that have already led to the disappearance of big and small mammals. In some cases, the number of people living or farming in the protected areas is very high.” 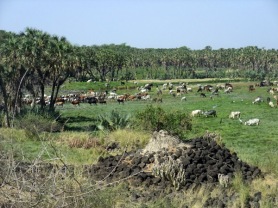 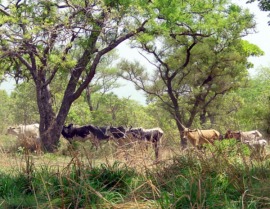 In Zambia, a major reduction in wildlife densities in most protected areas is reported. A colleague has found degraded parks across the entire network of West Africa. As a result of bushmeat consumption, the ‘empty forests’ of Central Africa are a sad reality. Further information on the status of parks and wildlife in African is featured in my blog: Game Over in Africa? I. Empty Forests, Silent Plains. Globally, only 20–50% of protected areas assessed are found to be effectively managed and some 28.6% of World Heritage Sites are listed as in danger, according to UNESCO.

Young bull enjoying the taste of Welwitschia mirabilis in Iona National Park, Angola — the oldest and rarest plant in Africa in one of the oldest National Parks.
photo by Bill Branch

Protected areas are the single most important tool in the conservation arsenal for conserving global biodiversity – by far. Edward Wilson, the sage of biodiversity, is pinning his hopes on an enlarged network of protected areas for avoiding the sixth great extinction event on Earth. Yet the same protected areas are disappearing in front of our eyes with hardly anyone, it would seem, even noticing.

Degraded parks are not a new phenomenon in Africa but the scale of degradation is increasing rapidly due to rising pressure on land. In his follow-up to The Limits to Growth, Jorgen Randers predicts that by 2035, the only available bio-capacity in Africa, that could be used for additional farms, will be within the parks. The rest will be occupied and the pressure on land will be rising faster than ever. In other words, there will be no room for many, perhaps most African parks in twenty years’ time unless they are valued equivalently to agricultural land by the majority populations.

My concern, shared by many working in the field, is that this value is not being achieved and that the rate of degradation of parks is now rising rapidly. There is sufficient reason to postulate an ongoing exponential rise in park degradation across Africa which is neither being monitored nor adequately reported by the conservation community. It could look something like this:

A Tool for Park Assessments

A tool that alerts the conservation community to failing parks is urgently required. It should permit rapid park assessment and rapid training of assessors. It would need to achieve the following tasks:

I have been calling for a parks red list in the conservation community for 25 years without joy. Others have made the same call. The necessary tools now exist. Here are some examples of tools designed for similar purposes:

The management assessments are comprehensive but require a substantial input of park-staff time and training (M. Goncalves de Lima and Carlo Paolini pers. comm.) which has inhibited their application across large regions. On the other hand, much less work is required to assess just the biodiversity status of parks – all that is required to establish a Parks Red List.  Remote sensing provides information on land changes, such as integrity of habitats, infrastructure (roads, dams, clearings and buildings), deforestation, spread of farmland, lake turbidity and fire frequency. Rapid field assessments can log additional information on presence of livestock, poaching, overharvesting,and reduced oxygen levels in lakes. The crude abundance of key indicator species can also be estimated quickly. Using this light approach, a Park Red List could be implemented across Africa in less than a year.

Resistance from the Conservation Community

Technically it would not be hard to establish a Parks Red List but resistance to the idea is coming from a surprising quarter — from within the international conservation community itself. IUCN has instead opted for the idea of a Green List. Applying the “Green List Protected Area Standard” is an even more complicated process than the assessment of Protected Area Mangement Effectiveness. It has merit. It makes its own contribution to conservation, especially where a failing park can be put onto an “improvement path”, but at the end of the day it is a bit like substituting a Species Green List for the current Red List. We could not rely on Green-Listed species to safeguard those that are critically endangered. It just wouldn’t do the job. Similarly, the Green List of Protected Areas will not do the job of alerting the international community to the state of park degradation.

On closer enquiry it turns out that the real problem stopping the adoption of a Parks Red List is the fear of the resentment of countries who do not like to see their parks given a red assignment. There is some justification for this fear. A few parties (countries) to the World Heritage Convention have contested fiercely management measures required by the World Heritage Committee to maintain the listing of their World Heritage Sites.  So, yes, it will be a difficult and demanding job to assign negative outcomes of park assessments and then negotiate suitable recovery programmes with national authorities. It will need to be handled sensitively and with financial support for poorer countries. However, it is a vital task. If we wish the conservation community to monitor the status of parks and reserves around the world, and safeguard global biodiversity, then we have to do it.

We have an ongoing protected areas crisis in Africa, and surely elsewhere in the world, that has been slipping past unnoticed. It will get worse rapidly if we don’t instigate a Parks Red List.

I will say it one more time: parks (call them protected areas if you wish) are the single most important means of conserving global biodiversity. We have to look after them or fail as conservationists. That means we have to monitor their health. We would be horrified if the global community retreated from its task of monitoring the spread of Ebola virus, Zika virus or avian flu because of the sensitivities of a few senior politicians in a small number of countries. We must not let our own sensitivies to being criticsed over the monitoring of park degradation blunt our resolve to protect global biodiversity.

Please pass on to others concerned about our parks.

I fell in love with nature when I turned twenty-one camping under Acacias in East Africa, surrounded by giraffe and zebra with my nape hair raised by the distant roaring of lions. I went on to work for fifty years in Africa, Europe and Asia as an ecologist and conservation consultant. A few years ago I moved to the Isle of Lismore to pursue my passion for reconnecting people with the natural world. My first book, The Storm Leopard, is a journey across Africa and into the heart of the environmental crisis. My second, Origin of Species: Bite-Sized, contains the essence of Charles Darwin's greatest work – his theory of evolution by natural selection – in a text that is 15% the length of the original. The third, Beyond the Hebrides, is the story of a sea voyage in an old leaking boat and on how to keep personal freedom alive. I am currently working on a fourth which is about the global collapse of the natural world. Its working title is, In This Together. It challenges us all over our current connections with nature. More details are on my website, www.martynmurray.com.
View all posts by Martyn Murray →
This entry was posted in Conservation, Nature, Protected Areas and tagged BIOPAMA, IUCN Green List, IUCN Red List, METT, PADDD, PAME, RAPPAM. Bookmark the permalink.