Bini cooked the greatest bush breakfast. We would be camping in some remote Ethiopian park and I would wake to the smell of coffee being brewed. It soon got me out of my sleeping bag to greet the morning. As I looked around the camp, Bini would be busy around the campfire. Seemingly out of nothing, a breakfast fit for royalty appeared – fresh papaya, omelette with sliced chillies and tomatoes, toast and wild honey. 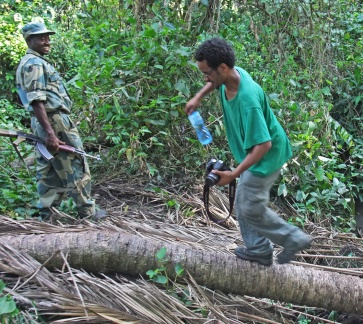 Soon we were back on the road. We loved our game of finding creative names for nature tours 500 Bird Circuit, ‘River Runs Through It’ Forest Boat Trip, Mountain of Dragons (you could see their menacing outline from the right vantage point) but we never forgot the more serious business of our road trip – putting together a practical plan for recovering Ethiopia’s beautiful national parks, based on their potential to support ecotourism and the help and participation of local people and resources. Bini was interested to the point of obsession about nature (which made two of us) and he was always positive. Hell, I miss him.

Bini had a great mind. He saw complex issues to do with people, their work and environment with perfect clarity. He recalled technical information with immediacy, and read extensively. This meant he could explain complex issues well to anyone – simply, precisely and with conviction. So he was gifted with a wonderful mind and when he talked, people were held. They sensed immediately that here was someone saying something important and authentic. They listened intently. So he had this ability to communicate but what made Bini even more special was that he also had a great heart. Bini was the most selfless and most caring guy I knew. Always wanting to check that everything was ok – food, seat, sleeping mat, or the things we were doing. How is that backpack? Is this log comfortable for sitting on? He was tireless in seeing to other peoples’ needs. People just liked him. They enjoyed his company and sought him out. Bini moved seamlessly amongst the many strata of Ethiopia. It was extraordinary to see.

And then he got down to hard work. Bini was on a mission in life. He had so many beautiful dreams for his family, his Bale mountain home, his wonderful rich country with its talented quixotic peoples, and for his future. He wanted to run his own nature tourism business. It would have been the best in Africa. He wanted to make Ethiopian parks and reserves the best in the world. He could have done it. He wanted to write all kinds of guidebooks – he had already begun them. He wanted to have links across the world for all these things. I miss those dreams.

I only knew Bini for a short time. We worked together in the city, on the road and in Ethiopia’s beautiful national parks. For all the differences – our countries, age (Bini in his early 30s and I in my 60s), experiences and backgrounds – we were just two guys with parallel dreams who enjoyed hanging out. Bini had lots of friends. And in that short time together, he became my friend. I cherish that friendship and honour his memory. I hope I can keep just a little bit of Bini’s selfless sparkle alive inside of me.

Biniyam Admassu journeyed on alone on 10 March 2015. He was fighting a wild fire in his beloved Bale Mountains but was hit by flames due to a sudden wind change. My heartfelt condolences to his family, the park staff and conservation team in Bale, and to all who knew him.

I fell in love with nature when I turned twenty-one camping under Acacias in East Africa, surrounded by giraffe and zebra with my nape hair raised by the distant roaring of lions. I went on to work for fifty years in Africa, Europe and Asia as an ecologist and conservation consultant. A few years ago I moved to the Isle of Lismore to pursue my passion for reconnecting people with the natural world. My first book, The Storm Leopard, is a journey across Africa and into the heart of the environmental crisis. My second, Origin of Species: Bite-Sized, contains the essence of Charles Darwin's greatest work – his theory of evolution by natural selection – in a text that is 15% the length of the original. The third, Beyond the Hebrides, is the story of a sea voyage in an old leaking boat and on how to keep personal freedom alive. I am currently working on a fourth which is about the global collapse of the natural world. Its working title is, In This Together. It challenges us all over our current connections with nature. More details are on my website, www.martynmurray.com.
View all posts by Martyn Murray →
This entry was posted in Conservation, Nature and tagged Biniyam Admassu. Bookmark the permalink.

4 Responses to My Friend Bini