Ponticum and Me: An Alien-Plant Love Story 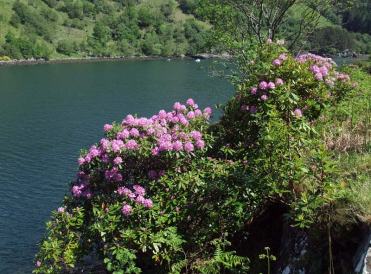 Ponticum at her most beguiling

This afternoon I drove along a small winding road above the Kyles of Bute passing through a forest of rhododendrons daubed by nature’s brush with splotches of pink and purple. The flowers picked out the natural shape of shrubs and from a distance painted crimson contours across the tumbling hills. Rhododendron ponticum, to give this shrub its official name, translates from the Greek as  ‘rose tree of the Pontic Alps’ – the latter part referring to a range of forested mountains lying to the south of the Black Sea. The district of Pontus also has Greek roots with the meaning of ‘sea’ so what we really have adorning the hills of Argyll is a glorious thicket of the rose tree of the Sea Mountains.

An irresistible invitation to wander

As I drove, I recalled the fun I’d had as a boy exploring the coastal pathways in amongst the rhodies along the shores of Loch Riddon over fifty years before. In my imagination there were escape tunnels and dens where I might hide should a longship happen to come round the far island full of invading Vikings. And then I remembered the bumblebees that liked to visit the rhodie flowers in my school playground. Big bees moving about big flowers; it fascinated me. I made a paper snapper and captured one of them. It buzzed a lot and when I peered inside it had pollen on its legs. I let it go. Ponticum and I were chums well before I learnt about ecology and conservation. As my car rounded a sharp bend, I caught a glimpse of blue water below; next second a high rocky crag flashed by, glinting in the sunlight. Through my sunroof, I could see afternoon clouds massing above and before I reached Glendaruel the first drops of rain hit the windscreen. It was sublimely beautiful.

Below my road, along the shores of Loch Riddon, the conservation authorities are intent on controlling this invasive shrub. The language is heavy duty – hydraulic flails mounted on armed tractors bases, chainsaws that cut down the older tree-like shrubs and herbicides that can be sprayed or injected into stems to prevent regrowth. The common rhodie is no laggard. It spreads rapidly from seeds or more steadily as a super colony that sends out roots from drooping branches. As it covers the ground it shades out other plants, denuding the chuckling streams of invertebrates, robbing our native woodlands of specialised butterflies and even, we are told, starving out the sleepy dormouse. The fact that these little furry balls are entirely absent from the woods and hedgerows of Scotland should not detract from this oppressive list, nor should the fact that their distant cousin – the tiny large-eyed wood mouse which is present in the woods and thickets of Argyll – actually benefits from the rhodie. All thicket-forming plants impact on local wildlife as is surely self-evident but let us not be misled by this inconvenient detail. Afterall, the rhododendron is an invasive alien creature on the rampage, a fifth column of unstoppable triffids that is driving native wildlife from the land.

Pause, two, three… I should not get carried away on a wave of opposing narrative. Yes, there is a real need to control rhododendrons, especially in the national parks and reserves that are designed to protect native habitats such as the fantastic Atlantic oakwoods of the West Highlands. Heavy management may be needed here and I am not agin it per se, but I do take issue with our habit of demonizing plants and animals the minute we stumble across some conflict involving them and us. Conservation is not just about science (where impartial criteria determine which species are to be protected, and which eradicated), nor for that matter is it just about economics (which justifies conservation on the added value obtained from harvesting resources and selling services), it is about our appreciation of the natural world. In the time it takes for a cormorant to filch a farmed trout, a wild creature can be labelled  a pest on economic grounds. I object to the buccaneering dominance of economic values and scientific ones for that matter.  I seek holistic conservation which includes these values, and others – a sense of cultural and historic importance, of community ownership and of the artistry and beauty in nature. Against all scientific advice, I like to anthropomorphise my encounters with wildlife. It seems to me that we have much more in common with wild animals than those differences that divide us. This does not mean I am unaware of evolutionary theory and its stringent rules when I consider wildlife, it just means that I am communicating at more than one level.  So when I look at two species, one native and one alien, I do not just see the scientific distinction between them or accept the management consequences. I see the whole organisms and I empathise with them. I think we should all learn to see nature in that way. Before you label me as mad and a danger to the public, let me explain why. 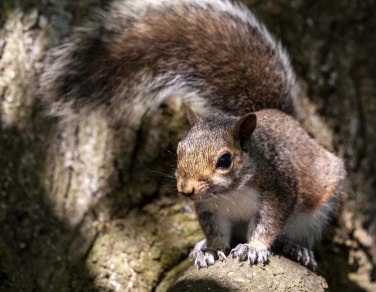 Grey squirrel – does it have a place in the British countryside?
Photo – Smudge 9000

Take the grey squirrel. It is a fantastic little critter – full of talent and up to all kinds of tricks, yet because they are alien here in UK we are told they are vermin. The problem, as is well known, is that the greys are replacing our native reds. There is no room in the prevailing management narrative on these islands for enjoying the grey as a clever and endearing woodland creature, let alone for looking after it. Because of the force of this management narrative, our authorities do not expect objections from the public to their policy of trapping, shooting or poisoning them. The press seems to accept this line of argument. In fact anyone expressing an alternative view is likely to be dismissed as a sentimental, bunny hugging, city-living ignoramus who is completely out of touch with biological reality. The red squirrels on the other hand, because they are native, are the good guys. It is okay to want to cuddle them. You would not be denigrated for talking to Squirrel Nutkin if you met him in the woods, although some might think you a little nutty.

I don’t like this hard distinction between red and grey squirrels, which is somehow oblivious to the glaring fact that, genetically speaking, the two animals are 99.9% identical. Sure, only one species is native. The reds arrived in Britain about ten thousand years ago as the ice retreated.  Subsequent arrivals of new species on these islands (at least the larger ones) usually made it with a helping hand from our ancestors. The house mouse arrived with Neolithic people probably soon after the arrival of the red squirrel; rabbits arrived with the Romans as did fallow deer.  Many of these ‘aliens’ have been around for so long that they are accepted as part of our British wildlife. It is nor surprising that we have mixed feelings when experts tell us that they are undesirable and should be cleared from the countryside. Take for example the noble beech. This majestic tree was also thought to have arrived with the Romans and some woodland managers in the north of England began to fell the invading giants as if they were marching triffids. Now we learn from pollen analysis that the beech has been present in England since the last ice age. So it is okay to love them again. Presumably that means we should plant them out and help them along. But what if someone discovers that they actually arrived with the help of Neolithic tribes? Must we then hate them again?

Usually alien species cause little trouble. Out gardens are full of them. But occasionally, as in the case of grey squirrels, there is a serious conflict with some native species. When I first learnt (some 30 or 40 years ago) about the peculiar way that reds were steadily giving way to an advancing wave of grey squirrels, I didn’t accept the then popular view that the greys were more macho, possessors perhaps of a killer gene which enabled them to knock out the feeble reds directly. It seemed more likely that the persistent advance of the greys was mediated by some disease. The macho gene view still persists but there is now evidence in support of a disease explanation – grey squirrels carry a parapoxvirus which is fatal to reds. If this proves to be the principal factor, then one potential method for controlling the conflict would be to ask epizootiologists to develop an oral vaccine. Whether that would work with squirrels, I don’t know, but it would be a starting point for effective control without the madness of demonizing greys and cosseting reds.

Why should we even consider spending money on a vaccine when we can shoot or trap the greys and sort things out that way? In my view, caring about plants and animals is important. In fact I would say it is the single most important component of wildlife management, as well as being the least commonly practised one. Care should be at the heart of our wildlife management policies because every other kind of argument for looking after nature, whether based on economic services, sustainable resource use, the diktat of the European bird and habitat directives, or whatever else, is fabricated. Ultimately it can and will be dismantled when the pressure for alternative uses of species and habitats becomes strong enough. On the other hand, by nurturing our natural affinity for plants and animals, we can begin to protect them because of that affinity and because of our shared place in nature. In doing so, we not only protect our ‘brothers and sisters’, we protect nature itself and in doing that we prevent ourselves from going right off the mental rails. That is just my opinion of course, you will need to look at the facts and make up your own mind.

So that is why I love the rose tree of the Sea Mountains, just as I love the Scots Pine, and whilst I accept that he is a bit of a wild boy who needs to be reined in from time to time, Ponticum is still my chum, and I look out for him each year with eager anticipation.

Martyn is a writer, sailor and conservationist. His first book, The Storm Leopard, is a journey across Africa and into the heart of the environmental crisis. His second book, Origin of Species: Bite-Sized, contains the essence of Charles Darwin's greatest work - his theory of evolution by natural selection - in a text that is 15% the length of the original. His third book, Beyond the Hebrides, is the story of a sea voyage in an old leaking boat beginning in an Irish creek and ending on the remote islands of St Kilda in the west of Scotland. It is a tale of romance and adventure which arises from one man's exploration of practical ways to keep personal freedom alive in today’s demanding society. Visit Martyn's website at www.martynmurray.com. Martyn was born and brought up in Ayrshire, Scotland and now lives in North Berwick. He went to school in Perthshire, and studied at the Universities of Edinburgh, Zimbabwe, Malaya and Cambridge for degrees in Zoology with field research into: shelduck along the Scottish coast; impala in the Zambezi Valley; wild figs and figwasps in the Malaysian forests; and wildebeest migration in the Serengeti. This work was underpinned by theoretical investigations into competition, conflict and social behaviour. Martyn is a consultant in biodiversity and natural resources management.
View all posts by Martyn Murray →
This entry was posted in Uncategorized. Bookmark the permalink.