Alive in the Dead of Winter

A friend was camping in the eastern Mongolian steppes a couple of winters ago. He was driving off-track to survey migratory gazelle and was well equipped for camping at -40 degrees Celsius with Arctic tent and goose down sleeping bag. One afternoon, he pitched his tent as usual on the lee side of his Land Cruiser with the entrance a few feet from the front door. His routine on getting up in the morning was to go over to the Land Cruiser to make some hot tea. As he climbed out of the tent, he found a steppe eagle – the great eagle of the Central Asian deserts and grasslands – standing on the snow between the tent and the Toyota. Thinking that it was sheltering for the night, he walked round it and into the car where he made tea. It was still there when he went back to the tent, and so he gently touched the eagle – it was frozen solid.

In the winter of ’63 we had comparable conditions. The river below our school in Perthshire – a tributary of the Tay – froze over, and it was possible to run across the pool where we swam in the summer or to walk up the middle to explore. At the rapids, great slabs of ice, some bigger than a grand piano, were forced into the air. Held inside were salmon, frozen in their depths and clearly visible like insects in amber. Others were strewn along the riverbank, presumably stranded as they tried to escape the lock of the ice. I passed countless numbers of them, all frozen solid, and in perfect condition with silver scales, and mauve backs, the males just developing their fighting kypes. I even found frozen fish up a tiny burn where I never imagined the salmon would run. There must have been an early Spring run in January and I guess the entire population was frozen, large and small, some so big and so wide in girth, I couldn’t imagine being able to lift them.

Our big freezes are the winter equivalent of summer droughts which can be equally severe on animal life. In southern Africa, prolonged droughts knock back wildlife populations and livestock alike, apparently obeying a 15-20 year cycle in association with El Niño events. The big freezes also respond to large scale climatic patterns, in this case the North Atlantic oscillation which controls the westerly storms that track across the North Atlantic. In Mongolia both types of devastation can occur together: the white “dzud” brings heavy snowfall that covers the pasture, preventing grazing and causing livestock to starve, but the black dzud is caused by summer droughts, cold winters and sparse food. Nature is her own manager. Freezes, droughts and dzuds are when she takes her toll of wildlife populations.

Twisted pines shaped and decorated by Nature at Yellowcraigs

This winter is looking like it might shape up into something similar to ’63 or perhaps the lesser but still ferocious ‘79. Coming out of his Edinburgh flat on the way to work last week, my son found a dead pigeon on the pavement. Evidently it had frozen overnight, although it wasn’t yet solid. Along the coast I’ve found several winter casualties over the past few weeks – dead gulls, a curlew and a young grey seal. In 1963 conditions were so bad that the population of many birds was halved and some, like the kingfisher, declined by 85-90%. But wildlife is remarkably resilient and our local residents appear to be riding out the winter so far. The garden birds are hungry for fat, the roe deer have been raiding the farmer’s fields for sprouts and the rabbits have kept to their burrows. On a lovely sunny morning after a recent snowstorm I went for a walk along the dunes at Yellowcraigs. I was well kitted out for the cold with down jacket, Irish tweed trousers, woolly hat and thick gloves. Everything was covered in a thick blanket of powdery snow which crunched underfoot. Still the icy wind bit at my uncovered cheeks. Rooks were taking cover under the buckthorn. I had to watch for indentations in the snow lest I step into one of the snow-filled rabbit burrows. I could see where the rabbits were living, poor things, because the occupied burrows had little black entrance holes with melted edges where bunny breath was thawing the ice. Judging from a fox’s tracks, it too knew which ones were occupied. It is amazing to me that anything could survive day and night in these Arctic conditions. I hoped the rabbits were snug in warm beds of soft hay and fur. 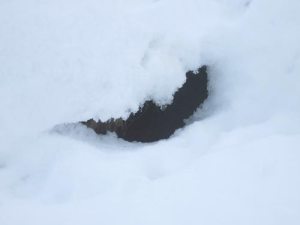 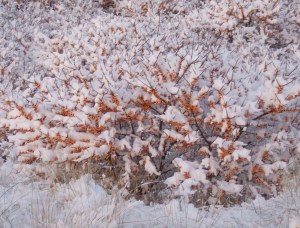 According to Ron Lockley (The Private Life of The Rabbit), only the soft form of pellet is produced underground. These pellets contain a mix of microorganisms and undigested fibre from the plants eaten. The pellets are taken in by the rabbit and held for several hours in a sort of reservoir in the stomach. During this period, the plant fibres are broken down by the bacteria, so that a rich soup of microorganisms and nutrients is released when the pellet finally dissolves. This reingestion of soft pellets apparently enables rabbits to remain underground for long periods: Lockley heard reports of rabbits staying belowground for several days or even a week when frightened by ferrets or after heavy falls of snow, and suggested they might reingest soft and hard pellets many times over in an emergency.

What an amazing creature is our humble rabbit. Looking out across the fairway, I imagined their little round bodies huddled together for warmth, lying in a torpor in their dark sandy chambers deep beneath the carpet of snow.

I fell in love with nature when I turned twenty-one camping under Acacias in East Africa, surrounded by giraffe and zebra with my nape hair raised by the distant roaring of lions. I went on to work for fifty years in Africa, Europe and Asia as an ecologist and conservation consultant. A few years ago I moved to the Isle of Lismore to pursue my passion for reconnecting people with the natural world. My first book, The Storm Leopard, is a journey across Africa and into the heart of the environmental crisis. My second, Origin of Species: Bite-Sized, contains the essence of Charles Darwin's greatest work – his theory of evolution by natural selection – in a text that is 15% the length of the original. The third, Beyond the Hebrides, is the story of a sea voyage in an old leaking boat and on how to keep personal freedom alive. I am currently working on a fourth which is about the global collapse of the natural world. Its working title is, In This Together. It challenges us all over our current connections with nature. More details are on my website, www.martynmurray.com.
View all posts by Martyn Murray →
This entry was posted in Nature, Uncategorized and tagged rabbit, Scotland. Bookmark the permalink.